The Council on Library and Information Resources (CLIR)’s Recordings at Risk Competition—funded by Mellon—invites collecting institutions around the country to apply for preservation grants for audiovisual materials. The judges represent a diverse array of fields and include experts in communications, music, performing arts, anthropology, linguistics, American studies, and cultural studies, as well as digitization and digital preservation experts who evaluate proposals for scholarly significance and urgency of the risk.

Institutions with the audiovisual holdings that are deemed most urgently in need of being preserved —and are capable of being saved—are awarded grants from $5,000 to $50,000 to do so.

“The grant primarily allows us to re-grant our Mellon funding to hundreds of much smaller and lesser-known organizations like tiny libraries, museum and historical societies,” says Charles Henry, president of the CLIR, which is based in Washington, D.C. “We get the word out so they can then digitize and make accessible their audio collections first, then their video collections.”

With the announcement of the competition’s first winners in April 2017, Henry anticipates that grantees will likely be similar to those who benefitted from CLIR’s earlier Cataloging and Digitization of Hidden Collections project, a precursor of Recordings at Risk. “We funded some interesting organizations,” he recalls, “While large universities and museums were represented, we also gave grants to The Erie Canal Museum, The Yellowstone Park Foundation, La MaMA Experimental Theatre Club and Litchfield Historical Society.”

“The competition encourages libraries, museums and universities to take inventory and think about this seriously,” Henry explains, “and this stock-taking alone has value, because it further helps define the scope of the problem and stokes the demand for taking AV preservation on now, before it’s too late.” 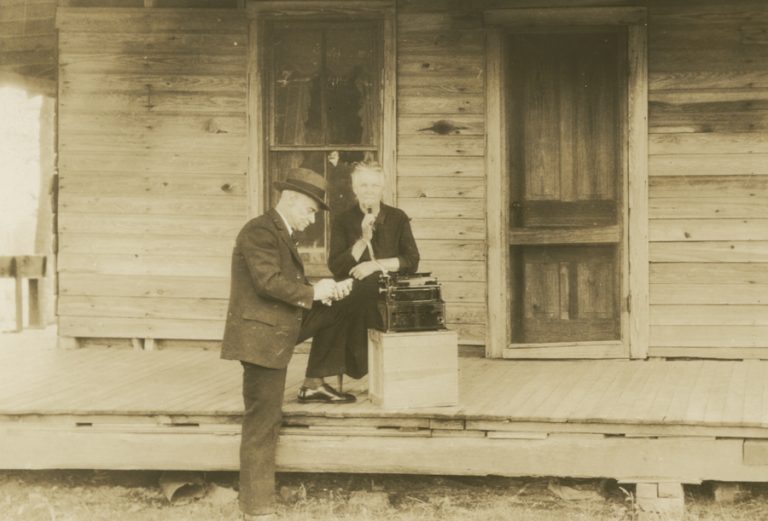 Last summer, thanks to a Cataloging and Digitization of Hidden Collections project grant, Duke University Libraries began to digitize a large collection of folk music assembled by English professor and folklorist Frank Clyde Brown. Brown’s efforts to record the sounds and nuances of North Carolina’s “folk” were part of a national trend in the early twentieth century to preserve American folk culture, aided by new technologies —such as wax cylinders and aluminum discs – that allowed folklorists to make recordings in the field. The 1,367 songs captured by Brown are a significant part of that legacy, and will be publicly available through the Duke University Libraries website for free in 2018.

Meanwhile, the PBS NewsHour Digitization Project—a collaboration between WGBH, the Library of Congress, WETA, and NewsHour Productions LLC—will digitize, preserve, and allow public access to 32 years of newscasts from 1975 through 2007. These episodes chronicle American and world history, and will provide scholars access to original source material, including interviews with presidents and other world leaders and reports on major issues and milestone events.

“One of the most important aspects of this project is that we insist that every potential grantee understands that they are participating in a national if not international endeavor and that creating and adopting standards and best practices are a part of that,” Henry emphasizes. “This all contributes to the longstanding preservation of our cultural heritage.